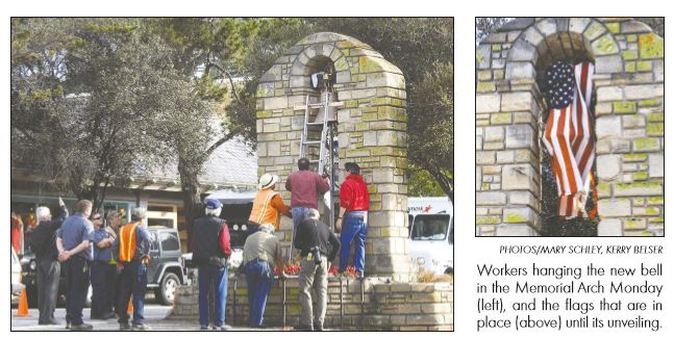 THE NEW bell for the World War I Memorial Arch on Ocean Avenue was hung Monday morning and then draped in American flags until its official dedication on Veterans Day Nov. 11. The bronze bell, designed by architect Charles Sumner Greene, was paid for with $10,000 from the American Legion Post 512 and bears the inscription,


Installing the bell marked the end of a project that began late last year after American Legion members wrote to then Mayor Jason Burnett asking that they be allowed to remove the historic bell from the arch because they were concerned it might be stolen. That bell, which was given to the city by Sir Harry Downie in honor of the city’s 50th birthday in 1966, is thought to date back to 1692 and is now being stored in the Local History Room at the library. Resident Richard Kreitman led the effort to raise funds for a replacement bell, cast according to specifications provided by Greene when he designed the arch, which was constructed in 1922. Due to a lack of funds, no bell was installed at that time.

Setting about to finally get one made as Greene had envisioned, and to give it to the city on the occasion of its centennial this year, Kreitman shepherded the proposal through approval by the historic resources board and the Carmel City Council. Cast at a foundry in South Carolina, the bell was finally delivered in late September, and in October, the HRB approved the design of the bronze bracket that would be used to hang it.

While the plan had been to install it on Oct. 27 - 50 years to the day after the previous bell had been hung - and then ring it to mark the start of the Centennial Parade on Oct. 29, city administrator Chip Rerig told proponents the bell couldn’t be placed in the arch until after the city council voted to accept the gift. That vote occurred during the council’s regular meeting Nov. 1.

A previous council decision notes Post 512 members can ring the bell at 11 a.m. on Memorial Day and Veterans Day, as is tradition, “and on other public occasions and celebrations, as agreed to by the Legion Post and the Carmel community.”

The morning of Nov. 7, Kreitman, Post 512 officer Paul Rodriguez, Carmel High School teacher Paul McFarlin — whose students cast the bronze brackets and wedges used to attach the bell to the arch’s beam — members of the public works department and others moved the bell from the post’s building on Dolores Street to the arch, and then slowly raised it, affixed the brackets and wedges, hung the bell and draped it with a pair of American flags, meant to cover it until the official dedication on Veterans Day.

But the presence of the flags rankled former Mayor Sue McCloud, whose own centennial committee was criticized for hanging a banner in the arch back in January.

“I was appalled to see the flag used as a drape over, I assume, the bell,” she said, citing the Veterans of Foreign Wars rules for flag etiquette, which include not using the flag as a cover, not letting it get dirty, and allowing it to fall free. “The flag is clearly being used as a cover and is not flying free, and is probably getting dirty,” she said.

Rodriguez, who has represented Post 512 in the bell project, responded, “It would be more inappropriate to fly anything other than the flag on a war memorial,” and said the group considered using a sheet, “but found that would be just rude.” Instead, they opted for two American flags that are due to be retired. “What more fitting end to the life of a flag than its last use being on a war memorial?” he asked. He noted that the nation’s flag has been hung in the arch on Veterans Day and Memorial Day in the past, and commented, “As veterans and guardians, we honor our memorials and always will.”

Michael Bloom, who was the post’s commander when terrorists struck the World Trade Center and the Pentagon on Sept. 11, 2001, recalled that “we and the city thought that flying the flag within the war memorial arch would be an appropriate way of showing support and patriotism” at the time of the attacks. “I am certain that if we were to go back many years, we would find other incidents when this was done,” he said. “Paul used good common sense in his draping the flags inside the arch prior to Veterans Day and the dedication of the Centennial Bell.”

The flags are set to remain on the bell until its unveiling after the Veterans Day ceremony in nearby Devendorf Park. Veterans and supporters will gather around the arch at San Carlos and Ocean for introductions, opening remarks and the dedication of the bell during the short ceremony, which will begin around 12:15 p.m. and will last about half an hour.